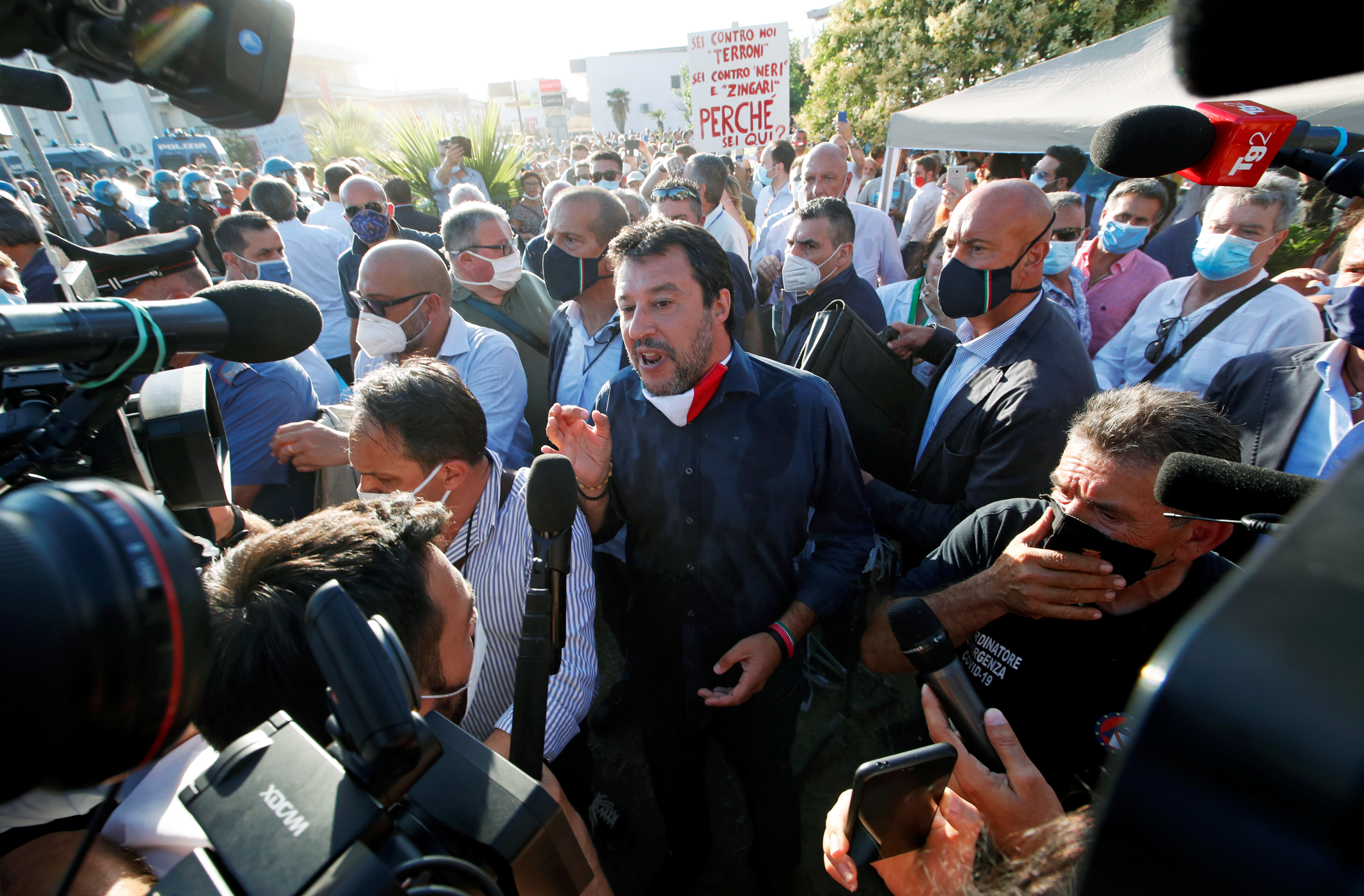 Decayed chairs and furniture began to fly from the windows. Hundreds of day laborers, many of them of Bulgarian origin, rebelled against the red zone decreed by the governor of the Italian region of Campania (south), Vincenzo De Luca, last Monday 22. After having carried out 789 tests of the covid- 19, 43 immigrants living crowded into five abandoned buildings in the town of Mondragone (28,500 inhabitants) tested positive. This is one of the main tomato harvesting areas in Italy and the workforce is almost entirely illegal. The new confinement is lethal. If they don’t work, they don’t eat. A domino effect that empties the Camorra box, the mob that usually exploits them. That is one of the problems, sources from the Neapolitan Prosecutor’s Office maintain, behind the violent revolt that exploded in Mondragone on Thursday and that has forced the Interior Ministry to deploy the Army in one of the most depressed areas of Italy.

La Domiziana is an old coastal road that connects Naples with Caserta, territory historically controlled by the Casaleses clan. A rickety road whose landscape, on one side and the other, becomes grim and decadent as the towns are crossed. There are few places in Italy that better illustrate the abandonment and betrayal of the State towards its citizens: corruption, mafia, exploitation, illegal construction and waste trafficking. A disturbing journey that culminates in Mondragone, the cinematographic setting for Matteo Garrone’s films about the Camorra and the social storm. This was for many years the territory of Italian day laborers who worked in the picking of tomatoes for the Cirio canning company. The firm built five buildings, still bearing his name, in 1957 to house workers at its factory. But it closed and when they were emptied, the immigrants arrived. Day laborers without rights who pay about 100 euros to the clans for each room in the occupied houses and who slip 13 hours a day in the field for about 25 euros. They are indispensable for the agricultural economy of the area, but also victims of the Camorra. It is the Grace of the business, otherwise it would not be profitable. Although it has already cost so many lives.

The first day laborer killed by the mafia in Italy was named Jerry Masslo. He was South African, had escaped persecution from the apartheid. He was killed among four boys in Villa Literno (Campania) the night of August 23, 1989 because they wanted his weekly pay. They did not expect him to stir, they took out their weapons and shot him three times. It was the turning point and the first time that the State realized the enormous problem it had in the field. But there were more murders, more riots – that of 2010 in Rosarno (Calabria) is already part of the history of Italy – and no real solution. The Minister of Agriculture, Teresa Bellanova, announced a few weeks ago a massive regularization of this type of workers to solve these problems. But, for the moment, the low number of requests received by the Interior Ministry speak of a failure of the measure.

The Mondragone red zone, which will remain closed for at least 10 more days, is a powder keg that now threatens the region’s poor economy. On Thursday, Italian neighbors came up there to scold the immigrants. They threw stones and batons at some vehicles with Bulgarian registration, racist screams were heard. At dawn, with the Army already deployed, they set fire to a Molotov cocktail a day laborer’s van. The mayor of the city asked the State for help and, instead, Matteo Salvini, leader of the League, orphaned for months by anti-immigration ammunition, appeared on the scene. The elections in Campania, a fiefdom that for years has governed the left and is currently presided over by one of the greatest scourges of the leader of the League, Vincenzo De Luca, will be crucial in the national balance of forces. “Perhaps now, after months of cabaret insults against me and against the League, De Luca will have woken up,” launched the extreme right wing, putting himself in the grip of the conflict.

The majority union in the area, CGIL, has been present every day in the Cirio buildings. Igor Prata, the general secretary of the Caserta delegation, denounces that “economic and labor exploitation is only a social emergency at the time when these invisible people, in whom nobody repairs, become ill and have no health protection.” “They cannot afford to get sick because they have no support from the state. The problem is that in recent years we have seen how the Camorra also used these day laborers. He uses caporales from his own ethnic group to take advantage of them. And in the Cirio buildings, of course, drugs are also sold. There is a trafficking in human beings to convert them into labor from which they take a slice of various criminal worlds. ”

The battle has just begun and it seems to many that it is in their best interest to keep it burning. The infected, all asymptomatic, are being transferred to the Maddaloni hospital dedicated to patients with the covid-19 but 13 Bulgarian immigrants who had tested positive are not located. “If we reach 100 positives after doing 3,000 tests, we will shut down all of Mondragone. Have I been clear? ”Warned the Governor of Luca.