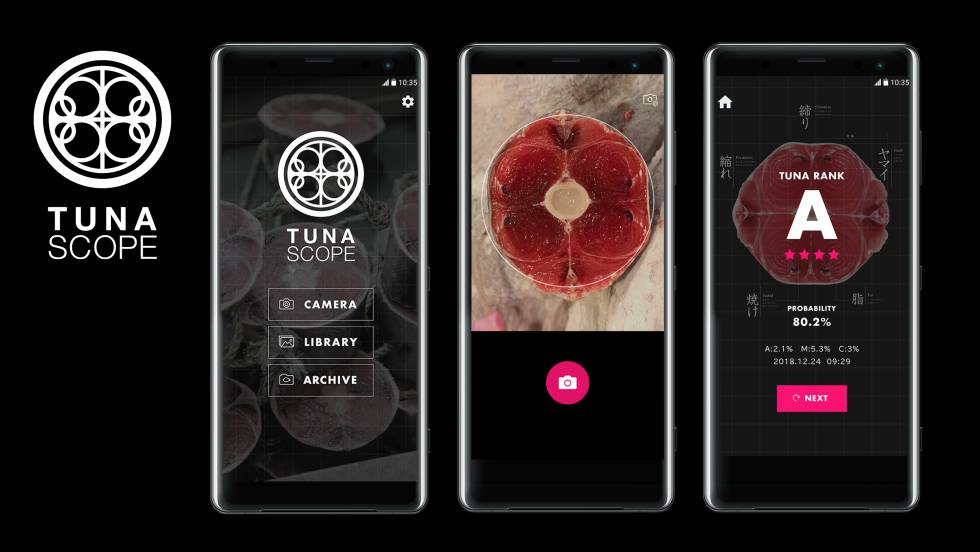 The difficulty of sending Japanese tuna experts to foreign ports, due to the current pandemic, has led to the launch of an application that, by means of a photograph of the animal’s tail, issues an opinion similar to that of the most demanding buyer.

Called Tuna Scope and developed by the Japanese advertising agency Dentsu, the application also announces the entry of artificial intelligence into high-end gastronomy and other professions that use the educated eye of an expert to evaluate natural organisms.

The selection of a good tuna is made in hard-fought wholesale auctions where the last word has expert veterans known with the Japanese word for connoisseur: “mekiki”. Its opinion determines the price of a tuna with a simple visual inspection of the open belly and the cut made when the tail is cut off.

As if it were a map, the cut reveals to the expert eye the texture, freshness, consistency and above all the amount of fat, the quality most desired by the Japanese sushi eater.

The mekiki They are usually the children of intermediaries who have been selecting fish for restaurants for several generations and their number, as with other traditional professions, is on the decline.

In order to create a mekiki making it available “anywhere in the world 24 hours a day”, the developers of Tuna Scope built a database with the help of experts at the port of Yaizu, west of Tokyo.

Its algorithm used 4,000 images of tuna tails, or the equivalent of the number of fish a professional must examine in ten years of development.

According to Dentsu sources, the application can be downloaded on Android after a direct contract with the company. The Tuna Scope aspires to become a world standard and extend its use to other sectors where visual inspection is key to decision-making, such as forestry, agriculture and medicine.

Earlier this month, a large sushi chain called Kura Sushi, which buys 70 percent of its fish outside of Japan, started using the app to cope with the difficulty of sending its experts abroad due to the pandemic of the COVI-19.

Although confinements have not been mandatory in Japan, many sushi restaurants have reduced their purchasing volume and Toyosu’s wholesale fish market, which since 2018 replaced Tsukiji’s largest in the world, resorts to online sales directly to individual buyers.

Spain is one of the suppliers of fresh bluefin tuna to Japan and the interruption of flights and the requirement of quarantines for travelers has begun to affect supply.

Although the growing taste for beef and the demographic decline have reduced the consumption of fish, Japan remains the first buyer of tuna in the world thanks to the large number of sushi restaurants, the star dish in its gastronomy.

The Michelin guide, which lists Tokyo as the first gourmet city in the world, with 226 locations, excluded the Sukiyabashi Jiro sushi restaurant from its 2019 version because the famous venue cannot accept more reservations from the public due to its low capacity only ten seats.

The price of bluefin tuna is annual news in Japan when, in the first auction of January in the Tokyo market, it reaches exorbitant figures. In the initial 2019 bid, the owner of a famous restaurant chain called Sushizanmai paid a record € 2.7 million for a 278-kilogram tuna caught on the northern coast of Japan.