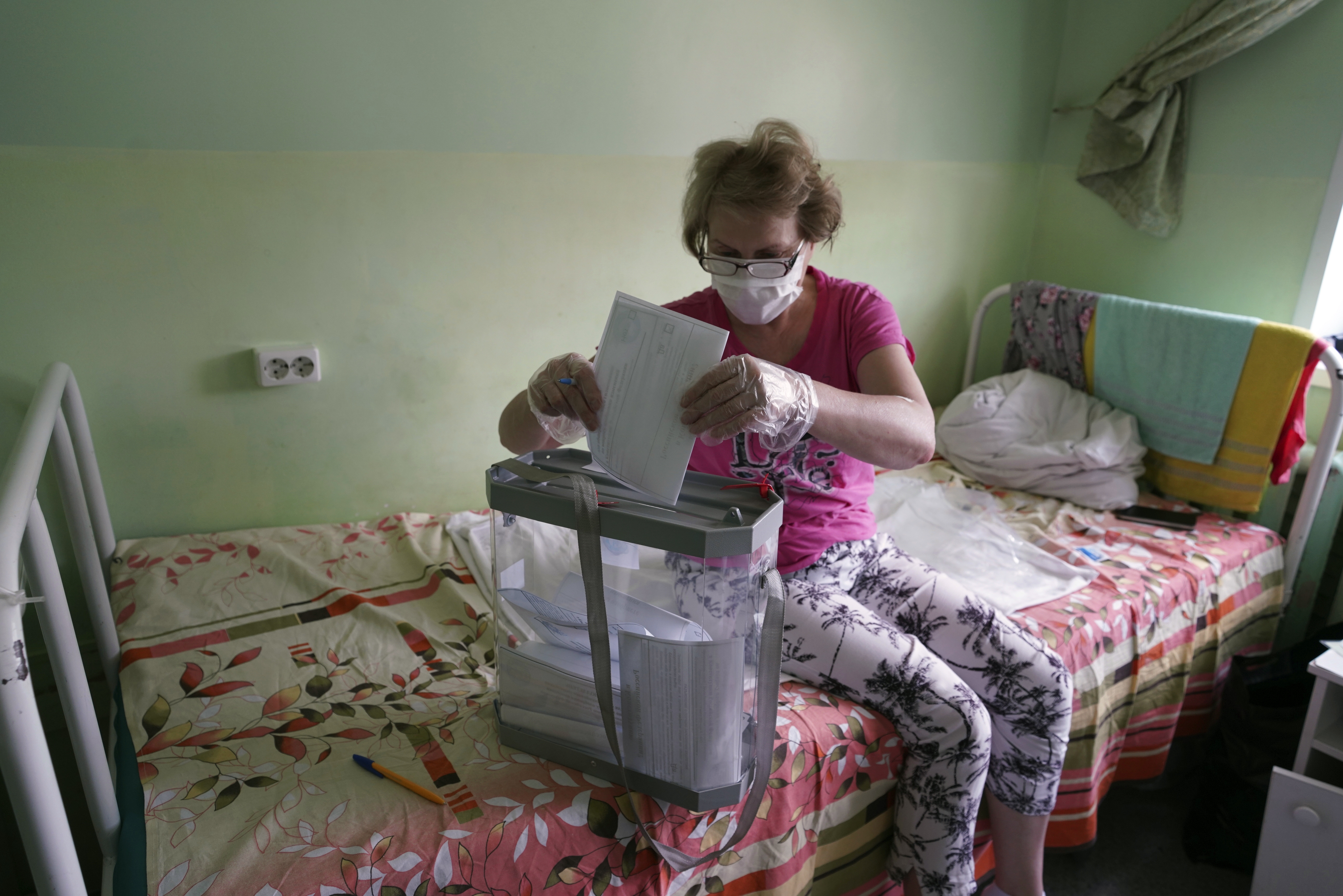 As if the battle against the coronavirus had also expired, thousands of Russian soldiers marched side by side in various cities of Russia on Wednesday to commemorate the 75th anniversary of the Soviet victory against Nazi Germany. Solemn Russian President Vladimir Putin has presided over the victory parade on Moscow’s Red Square, surrounded by dozens of elderly veterans who fought in Soviet ranks in World War II. With lapels studded with medals and without masks. For one day, the covid-19, which counts 600,000 infected in Russia, has been set aside. “We cannot even imagine what the world would have become if the Red Army had not come to its defense,” Putin said in his speech. The parade, held late by the pandemic, is one of the most important and emotional national holidays for Russians. And it is an important letter to breathe patriotic spirits into citizens who are tired and hit by the economic and health crisis at a key moment for Putin. The Russian leader, with popularity at record lows, needs the support of his compatriots to legitimize the reform of the Constitution that paves the way for him to remain in the presidency and which is voted on July 1.

“They defended their land, liberated the states of Europe from invaders,” Putin listed. “We will always remember that it was the Soviet people who crushed Nazism,” said the Russian president. “We are open to dialogue and cooperation on the most current international issues. Among them, the creation of a reliable and general security system that the modern and rapidly changing world needs. Only the unit can defend the new threats of the future, “he added. In a turbulent time, with the United States and China increasingly confronted and new alliances forging, Putin wants Russia to be one of the great powers that debate the new world order.

The Russian leader’s speech has been much more conciliatory than the one he has sung in recent weeks, when he has accused the West of rewriting the history of the war to ignore the role of the USSR in victory. “Our debt is to remember that the Soviet people bore the brunt of the fight against Nazism. This is the main, pure and unaltered truth about war. We must protect and defend it, transmit it to our children, grandchildren and great-grandchildren. Today’s military parade is in honor of this sacred truth, in honor of the outstanding generation of victors who determined the outcome of the entire Second World War, ”said Putin. Behind him dozens of veterans between the ages of 80 and 90, who have spent the past two weeks protected in spas and hotels on the outskirts of Moscow in order to participate in the ceremony and shake hands with the president, they listened erectly to his solemn words.

Putin watches the Victory Day parade alongside WWII veterans in Moscow on Wednesday. On video, part of his speech.(Photo: EFE | Video: Reuters)

With the restrictions stemming from the pandemic, Putin’s grand patriotic event to showcase Russia’s military potential to world leaders has been tarnished. The event that was planned as the largest parade in the recent history of Russia has received only a dozen leaders, mostly allies of the former Soviet republics, such as the President of Belarus, Aleksander Lukashenko. With the exception of Serbian President Aleksandar Vucic, all European leaders have evaded the visit to Moscow, as is usual since Russia annexed the Ukrainian Crimean peninsula in 2014. Croatian President Zoran Milanovic, who had confirmed his presence Finally, he did not go to Moscow and reported that he was not traveling because his plane had failed. Kyrgyzstan leader Sooronbay Jeenbekov had to stay at his Moscow hotel after two members of his delegation tested positive for coronavirus on Friday night.

Chinese President Xi Jinping, Putin’s ally, also failed to attend. Nor his French counterpart, Emmanuel Macron, whom the Russian leader is courting to lift Russia out of western isolation after the annexation of Crimea, and whom he hoped to receive in Moscow. Numerous foreign delegations and contingents participated in the march. Among them, China – the most numerous – and India, embarked on a confrontation in recent days due to a conflict on their borders.

With around 7,000 new coronavirus infections detected every day, Russia is, with more than 600,000 infected, the third country in the world with the most registered cases, behind the United States and Brazil. The Eurasian country has counted 8,513 deaths, according to official data. And with those data, a fifteen Russian regions decided to suspend or further postpone their parades. But the great march of Moscow continued. 14,000 soldiers, artillery, 234 armored vehicles and 75 military planes and helicopters paraded through Red Square, adorned for the occasion with Russian and Red Army flags and historical banners, a very symbolic figure. Among the elements of the latest Russian military technology, such as the MiG-31 interceptors, which transport hypersonic missiles, a squadron of World War II T-34 tanks, which in their time were the pride of the Soviet armor that fought in Germany, it rumbled on the pavement of central Moscow.

Despite the recommendations of the mayor, Sergei Sobianin, dozens of people crowded into the downtown areas of the capital where the parade was taking place. With hardly any masks and no social distance. “Our people liberated Europe from Nazism. That is a reality that everyone should know, that cannot be lost in the generations to come, ”he stressed, lifting his mask to speak. Aleksander Vostrikov, a 71-year-old Moscow student and pensioner, who approached the surroundings of Red Square to see the parade. “Just as we won the Great Patriotic War [el periodo de la II Guerra Mundial en el que participó la URSS] we will also beat the coronavirus. And for that we need a strong leader and stability in Russia, ”said Svetlana Mayunova, a 58-year-old teacher from nearby Tula.

Russia has begun to emerge from economic hibernation and to ease confinement measures in time for the great patriotic holiday, which was originally scheduled for May 9, Victory Day, but which was postponed by covid-19 until another date is also symbolic: on June 24, 75 years ago, the first parade in front of Iosif Stalin was held in Moscow. Some, like the opposition Alexéi Navalni, a well-known anti-corruption blogger, have criticized it and called it “stupid” at a time of health crisis. The Kremlin has assured, however, that measures have been taken to protect those present.

The Victory Day military parade has gained strength and power in recent years to become one of the most important national holidays, if not the most. Between 25 and 27 million Soviet citizens (military and civilian) died in World War II and 95% of Russians consider the 1945 Soviet victory the most important event of the 20th century for Russia, according to this week’s data from the pollster. state VTsIOM. Putin has placed this historic moment in a central place in his patriotic and nationalist discourse. And this year, despite the coronavirus, he has not wanted to resign it at a key moment for its continuity and on the eve of the national vote on the reform of the Constitution, which includes an amendment that would allow him to run again for the elections once that his current mandate expires in 2024.