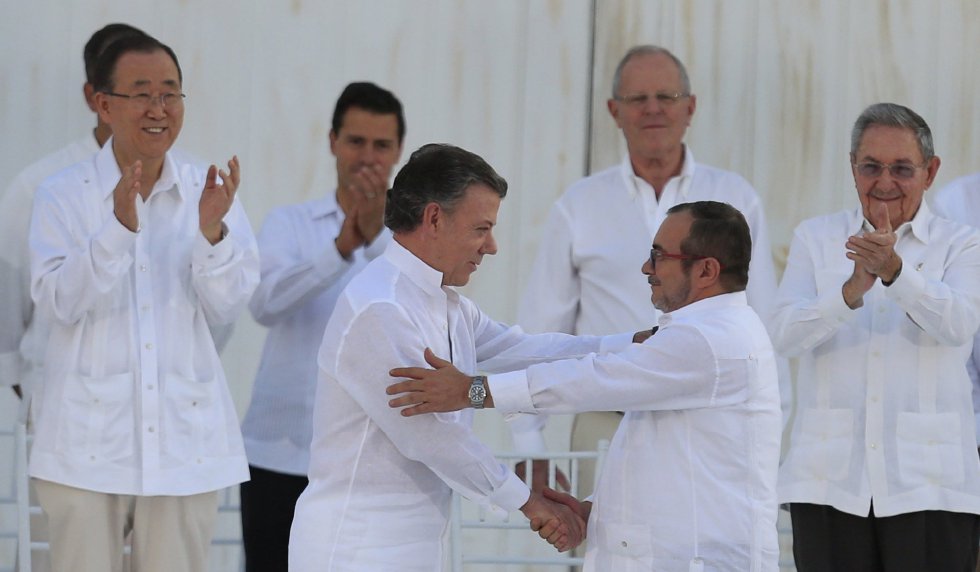 It is his birthday but Rodrigo Londoño, formerly known as Timimochenko, has been solving new doubts that arose about the attack that almost cost him his life. “I am alive thanks to the police and the Army,” he later ratifies in conversation with EL PAÍS. Timochenko (Quindío, 1959) was the last guerrilla leader, who signed the peace agreement with former President Juan Manuel Santos and today, the most visible figure of the Common Revolutionary Force, FARC, the political party that emerged from the peace process. On January 11, the Colombian police reported that they had thwarted an attack against him ordered by a dissident group.

He speaks in the party office, in a central neighborhood of Bogotá, where he once shared with Iván Márquez, who together with El Paisa, ordered the frustrated attack against him. Beside him, a small black dog sits in a chair as his guardian, although his entire bodyguard is on the first floor of the party headquarters, even more alert after the assassination attempt.

The news, however, is dark. During the operation to thwart the attack, the police killed two ex-guerrillas who were responsible for assassinating him; but now photographs are circulating in which it is denounced that these two ex-combatants were tortured and burned.

Question. After several days, what new information do you have and what happens to these complaints?

Reply. Unfortunately there has been speculation in many sectors, including within the party and much more now that these photographs appear. We are asking for an explanation. I have prepared a right of petition to have access to the file. If it is a confrontation we want to know how things happened.

P. What exactly are you asking the prosecution for?

R. As a victim, I request access and a copy of the autopsy carried out on the bodies of these two people linked to the event; to be told what international protocols were performed; the place, date, and time of death of these ex-combatants and the mechanism of death of each one.

P. What do you say about those who think that this was all a government smokescreen?

R. So far I have no evidence to say that it was a montage that saved my life. The ones I have so far indicate that there was an assassination attempt. The police had warned me that there was a command named to do so. They told me: “They will do it when I leave Bogotá.” I ratify myself on that. We have to wait for the investigation. But if it were verified that it was a montage, I would not understand the number of soldiers and police that I saw on all the roads holding up dust, what need would I have to do that.

P. Many were surprised that you thanked the police and the Army. Was it criticized within your party?

R. This situation occurs in a very complex context in which social leaders and ex-guerrillas are being assassinated, so of course, many people question me thanking them. There are colleagues who say that I shouldn’t have said it. Even ordinary people who have suffered torture or disappearances by the military forces. Many find it difficult to accept that suddenly there is a sector or people within the military that act well. Furthermore, we stop fighting with weapons in hand. Before, our objective was to change the State by destroying institutions that support it, such as the armed forces. We were more than 50 years trying to do it and we did not succeed. We change, we put arms aside, we continue fighting not to destroy the State but to transform it, now through the mechanisms that this restricted democracy allows. In this sense, we cannot say that the members of these institutions are our enemies. There are many difficulties and facts that I condemn.

R. We lack escorts, means of protection. A great effort is being made by the National Protection Unit (UNP) because there are no resources. We have indicated that what we agreed on in Havana regarding security is not being implemented. It is not only our security as a party, but the collective security, of social leaders, for example. The agreement left a series of proposed instruments that are not being respected. I criticize all that and condemn events such as the murder of Dimar Torres [excombatiente asesinado por soldados del Ejército]. But as a result of that, I cannot go on ranting about people thanks to whom I am alive. The situation is further complicated by the circulation of the photos of the ex-guerrillas linked to my case. Nor can I defend how the operation was because I do not know the details.

P. The FARC bodyguards union has said there are doubts about this operation.

R. I only know what the police say, that they were intercepted and responded with weapons. It is the only thing I know. After the event occurred, I met with the police director, the interior minister, and the head of the UNP, who showed me documents and explained to me. But with this mess it is better to take things slow. The only thing I can assure you is that at that moment they convinced me. Now, with this that is going out one also has doubts. In the days prior to the operation, at the end of the year, there was a moment when I hesitated, due to circumstances that can be counted later. I thought, here is something strange and I wrote a Twitter message but I left it unpublished. I said, better not publish it because it creates a scandal and many things fall apart. At that moment an intelligence officer came and gave me more elements.

P. Why did you convince him?

R. We know a little about this, we know how it is done and the elements of judgment he gave me convinced me. So I decided not to get the message out of Twitter and then the facts came.

P. What has meant that the assassination attempt comes from El Paisa and Márquez, his former colleagues?

R. It is very sad, very unfortunate but it is not the only case in the world. Some people consider that what we did was a betrayal above what most of the Colombian people and the international community think that peace is the right path.

P. When Márquez and El Paisa launched their group, the second Marquetalia, did you think they would attack it?

R. I have been saying it for a while. That campaign that this was treason has misinformed the bases. Once I was in a reincorporation space explaining how the process is going and an ex-guerrilla stopped and said to me: “Comrade, yesterday I greeted you with hatred because I was convinced that you had handed us over.” So of course, that’s dangerous. Anyone kills one convinced that he is killing a traitor. Hopefully these events alert other colleagues.

P. And what has this generated in the party that is said to be divided?

R. I have received the endorsement of the vast majority of people. There are natural difficulties, but the bulk of the ex-guerrillas accompanies the process. The others are minority sectors. Who decided to return [a la guerra] they are a very small group that are capitalizing on discontents and the lack of implementation in the regions.

P. What is the real dimension of these disagreements?

R. I don’t like the term dissent. If there are people who left here, they are deserters. Most of them approved the agreements. Those who are leading the second Marquetalia are deserters, they had the opportunity to disagree at many times. It must be remembered that before they defended the process and when there are difficulties what explanation is there, desert? Why did they do it? It is not time to talk about it. But that has no future. It is pitiful because that only brings death.

P. Do you think they have any political projection?

R. They will not have a future as a political project. A Spanish MEP who has experience in this type of peace process in Africa told me that this is common after the peace processes. But it has no political future, they end up being gangs because they are fighting a business.

P. These groups are often confused with the name of the party, will you insist on changing it?

R. I will take the proposal to the national assembly of the party. If we do not, we will continue to make a mistake. This does not imply forgetting our history, what we were, that memory cannot change even if we change our names.