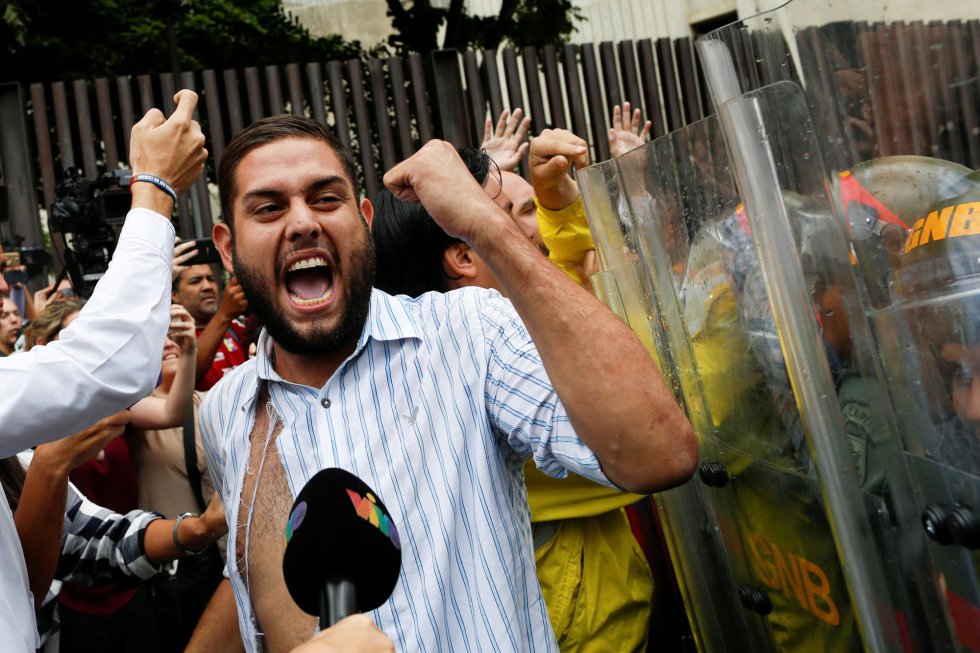 The family of Venezuelan deputy Juan Requesens, who has been accused by the Nicolás Maduro regime of being an accessory to the drone attack on Saturday the 4th, believes that the legislator was tortured to accuse himself. This Friday, Jorge Rodríguez, the Minister of Communication of the Government, presented a video where the deputy allegedly confesses to having participated in the plot at the request of the parliamentarian Julio Borges, exiled in Colombia.

“Several weeks ago I was contacted by Julio Borges, who asked me the favor of transferring a person from Venezuela to Colombia, he is Juan Monasterio,” says Requesens in a video of which the conditions in which it was recorded are unknown.

In the video presented by Minister Rodríguez, Requesens says in his own voice that he managed the entry into Colombia of Juan Monasterio Vanegas, one of those accused of being involved in the explosion of two drones whose objective was to kill Maduro and the leadership of the regime. Monasterio Vanegas, who according to the official version was detained by passers-by on the day of the incident, blamed Requesens in a video released on Tuesday.

Requesens ‘recording has a notable delay between the audio and the image and was presented by the Government as proof of Borges’ supposed intellectual authorship in the event. Caracas has asked Interpol to arrest the parliamentarian based in Colombia.

“Anyone who knows Juan knows that he doesn’t talk like that,” said Rafaela Requesens, the sister of the detained deputy. The family and the defense of the opponent waited four hours for the preliminary hearing of the accused, which has been deferred until Monday. His lawyer did not have access to the file nor was he able to speak with the accused.

“We know from people who have already been imprisoned by the regime what they are capable of doing to obtain information or force them to say what they want. The videos that have been shown of my brother only show that it is a persecution, a kidnapping, a violation of his rights and his parliamentary immunity, a humiliation of his dignity, ”said the detainee’s sister from the Palace of Justicia, in the center of Caracas.

For the deputy Juan Miguel Matheus, Requesens’ party partner, the video is just a demonstration that the parliamentarian was subjected to torture to obtain a confession. “We are before a State that is dedicated to cruel and inhuman treatment, because it is not the first time that psychological pressure has been used to obtain testimony that incriminates opposition leaders,” he said. The legislator affirms that the recording has no legal validity because it violates the Convention against Torture. “Juan was unlawfully deprived of his freedom, he is presented as a hostage forced to speak to his captors and without even applying formulas of the law that correspond to his parliamentary investiture, without being presented in court, without his relatives having even been able to see him Matheus declared.

Hours after the first video, another recording was leaked on social networks that shows Requesens without a shirt, with his underpants full of excrement and where it is claimed that he was drugged. “With this they continue to demonstrate the blows that the regime gives and I do not mean physically, but the humiliation that they want to cause it. Juan is an operated person (of a bypass gastric), that every so often he has to eat and every so often he has to go to the bathroom, ”Rafaela added.

The Requesens – the 29-year-old deputy and his 26-year-old sister – were taken from their home on Tuesday night, August 7, by armed officials and taken to the political prison of El Helicoide, without court orders or explanation of the reasons for the detention. That was the last time Rafaela saw her brother. “He told me‘ I love you, blow kisses to the babies ’who are his two children.” 72 hours later his relatives found out about him. “If they think that with that video they gave proof of life, they are wrong, we want to see Juan and we want to see him free because he is innocent,” the sister stressed.

The opposition leadership called for a mobilization in Caracas for this Saturday in rejection of the arbitrary detention and humiliation to which Requesens has been subjected.